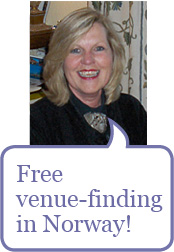 From its early beginnings as a Cathedral city in the 1100’s, Stavanger, pop. approx. 127.000 and Norway’s third largest city, has developed into the Oil Capital of Norway without losing its small town charm. Lively, picturesque port and Northern Europe’s largest and best preserved settlement in wood dating back to the 17- and 1800s («Old Stavanger», above).

Before the modern Oil Age which has made Norway an extremely rich country, another kind of oil brought wealth to the city: that of the sardines canned here. The former sardine canning factory can now be visited for a taste of freshly smoked sardines whilst you sip your champagne! Or how about an aperitif served on an oil rig at the Oil Museum?

Other activities include fjord cruises, for instance into the narrow Lysefjord with the amazing Pulpit Rock, perhaps enjoying a great Seafood Buffet lunch on an island on the way, fishing in the clean waters of the North Sea, helicopter sightseeing, a Medieval concert in an Abbey church from the 1300s, and visiting a farm from the Iron Ages.

International airport (SVG) only approx. 20 mins. from the city centre.